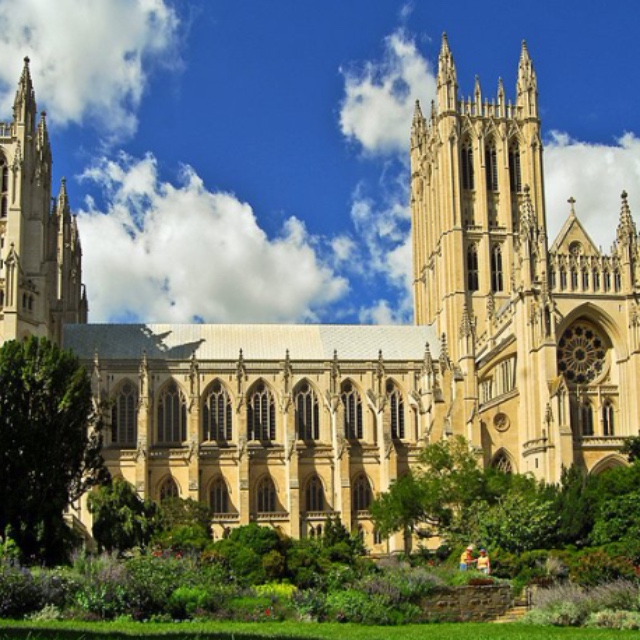 Plan your visit during the morning or afternoon hours when the sun will light up 215 stained glass windows.
After 83 years, the sixth largest cathedral in the world was completed and designated as a house of prayer for all people. You can learn more about this fascinating cathedral by participating in specialty, guided tours that include the Gargoyle Tour, the Behind-The-Scenes Tour and the Tower Climb.
During worship services, you will be able to hear the beautiful sounds of music played on The Grand Organ with its 10,650 pipes. Additional architectural features of the cathedral include 112 gargoyles, 215 stained glass windows and a sculpture that looks like Darth Vader from Star Wars. The Rose Window was created from over 10,000 pieces of stained glass.
On July 21, 1974, five years after making history as the first men to set foot on the moon, Apollo 11 astronauts Michael Collins, Neil Armstrong, and Edwin “Buzz” Aldrin presented the Washington National Cathedral with a special donation, a small piece of a moon rock from their voyage. The moon rock was embedded into the stained glass masterpiece referred to as the Space Window.
This majestic building features a 30 foot tall central tower and a crypt where Helen Keller and President Woodrow Wilson are buried.