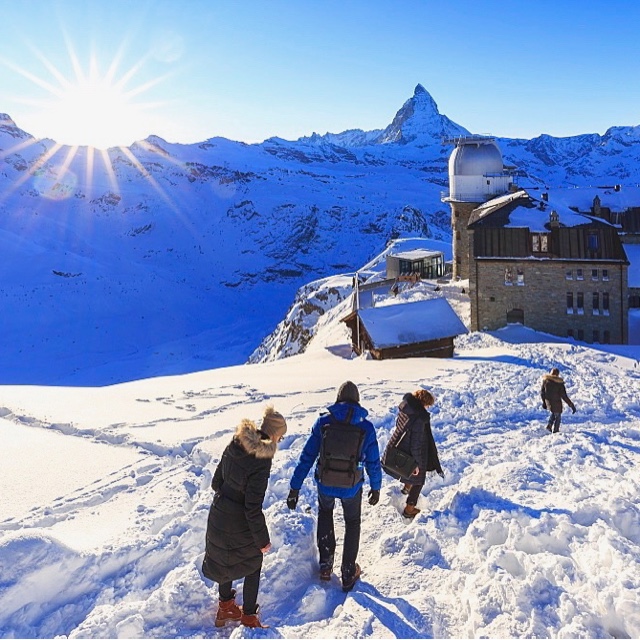 View the Matterhorn from the Gornergrat Observatory

Since 1898, the observation platform at the Gornergrat summit has been one of the top excursion destinations in Switzerland. The summit has the best view of the Matterhorn, the most famous mountain peak in the Alps. To see this breathtaking view, climb aboard the Gornergrat train and ride Europe’s highest open-air railway. Your ride begins at the village center in Zermatt. Sit back and relax while you enjoy the mountain, lake and forest views as you ride to the 10,132 foot summit.
On July 14, 1865, the first climbers reached the summit of the Matterhorn but four of the nine men died during the descent. On July 22, 1871, Lucy Walker became the first woman to climb to the top of the Matterhorn. She accomplished this feat while wearing a long, flannel skirt.

More than 3,000 people climb the Matterhorn, every year. During the summer months, as many as 150 climbers attempt to reach the summit, every day. A majority of the climbers abandon their quest for the summit because of a variety of reasons, with weather conditions being the most common obstacle. Every year, approximately 1,200 people need to be rescued from the mountain and an average of 15 hikers die attempting to climb the Matterhorn, making it one of the deadliest mountains in the world.