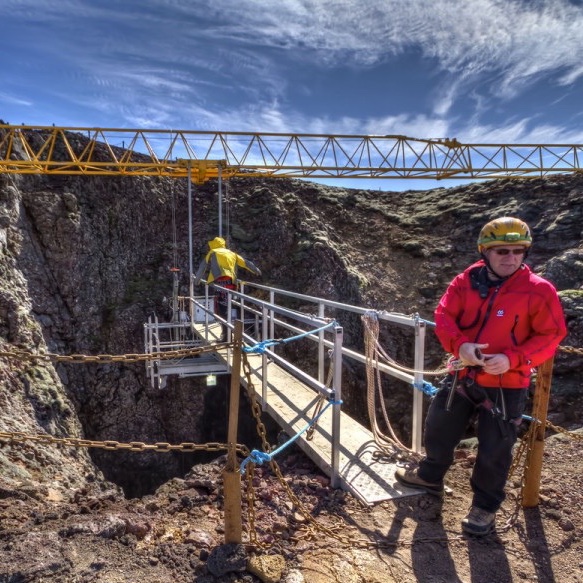 Inside the Volcano Tour

Journey towards the center of the Earth on a 6 hour, guided tour that includes riding an elevator that descends 590 feet to the vast magma chamber of the dormant volcano, Thrihnukagigur.

This is the only place on Earth where you can explore the vast magma chamber of a dormant volcano. Last erupting over 4,000 years ago, the three calderas of Thrihnukagigur Volcano have lain dormant for so long that one of them is even safe to climb into. Unlike most dormant volcanoes which simply cool with their previously roiling ocean of magma in place, creating one solid plug, the fathoms of magma that once boiled inside of one of Thrihnukagigur’s peaks seem to have simply sunk back down into the earth, leaving a massive, stunning cavern.

Your inside the volcano tour begins with an hour-long hike that is mostly uphill. Once you arrive at the volcano, you can take an open-air cable lift elevator that will transport you into the heart of the volcano through a 12 foot by 12 foot cinder cone opening. that descends 590 feet to the magma chamber. The six hour, guided tour is a once in a lifetime adventure you will not want to miss.